As proof that all things come full circle, I'm about to spend the day making a movie! Well, capturing the first of 2 1/2 days' worth of footage that will be turned into a short film, hopefully to be submitted to CHI 2012. No pressure, then...

I'm thrilled A) because this is fun, and B) because I get to stare up close and personal at the workings of a series of focus groups and co-design sessions. Plus it should give my mind time to ponder something else besides the Great Imponderable, which is the unholy conglomeration of post-it notes stuck on the interior doors at my flat in an attempt to map out the introduction and outline to my project. I was hoping that in one giant leap, I would go from post-its to fully formed picture of the way ahead. Instead, I went from post-its to a giant glop of indecipherable scribbling on three pieces of A3. There was much more than I thought I'd have of the sort of middle-granularity stuff, and a lot less than I'd hoped of the big picture, connected-to-theory stuff. 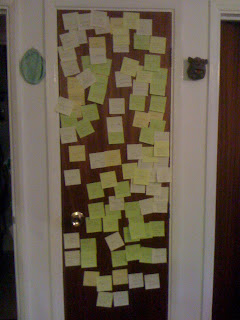 But never mind that for now! Time to finish my tea and try to resurrect my BA in filmmaking!
Posted by Jocelyn Spence at 00:54 No comments:

I had one of those blissful days on Monday where the supervision (a.k.a. meeting with my two supervisors) goes really well, and everything is positive and promising and clear, and I can barely sleep for all the excitement. And the next day I dive in to tackle what now seems so thrilling, so doable. And that night I realise that if I want to live up to all these thrilling and doable ideas I have, I'm going to have to give up sleep for the next two years and still not come in on time. And then it's two days later, but instead of being totally overwhelmed and depressed, I've got my newly revised to-do list to cling to. So somehow, magically, the bliss from Monday hasn't been turned upside down.

I've managed to either do or legitimately remove almost everything from my to-do list, which was bearing down on me most hideously up until a week or two ago. I just have to try to stay on top of my reading list - to which I've added about a dozen articles in my quest for the answer to a single question, which has taken me all day, and remains unanswered.

Why am I still smiling? Why do I enjoy this? Somebody smack me. Maybe a sharp blow to the head will make me want to buy a TV instead of pursuing a PhD that's obscure even to me. Then again, maybe it will just give me a headache while I read.
Posted by Jocelyn Spence at 09:58 1 comment:

The Life and Death of Marina Abramovic

1. I should know a lot more about Robert Wilson before saying anything. That said...

2. Whenever she needed to speak or sing, Marina displayed surprisingly 'bad' stage presence - which is NOT bad, as she's hardly set out to make a name for herself as a suave theatre-type! What it did was give a little bump, a little underlining, to every time she opened her mouth in the story of her own life, which I think ended up having a brilliant effect.

3. Nobody, but nobody, could possibly get away with speak-singing lines like 'Salt in my wounds', in what amounted to practically a baritone, channeling Edith Piaf - factorial - in a military uniform, with her long hair shaken out down one shoulder, in a thick Serbian accent, on a dark stage. Nobody except Marina Abramovic. And, I bet, nobody but Marina Abramovic after a couple of hours of setup as to the horrors she has lived through. Decontextualised, in front of an ignorant audience, I shudder to think the response it would have received.

4. For a piece predicated on staggeringly slow movements, repetitive sounds and movements that echo the durational nature of her own work, the time flew by. If that's not an achievement, I don't know what is.

5. Often, an element that seemed completely cryptic would be explained in the very next section, so that if it were possible to play the performance backwards, it would be a series of illustrations of whatever Willem Defoe had just said. Like crashing head-first into a piece of furniture.

7. Further entertainment was provided by the three kids I eavesdropped on. They were watching the whole thing on shrooms. Entirely too funny.

8. For long stretches, Marina would be sitting stock still, staring at the audience, and we of course could stare right at her. I wonder how many people actually did for any amount of time, and whether any felt the sensations that have been reported, and that I can imagine feeling myself, when sitting across from her one-on-one? Seems like a playground for theorising on presence, right there. I only thought of it when I noticed I was essentially giving up this opportunity to have that experience with her by being continually distracted, if that's a sensible term to use, by what was happening on stage. But then I realised I felt nothing looking at her other than interest and respect.

9. I have to admit, the best anecdote from the evening is how I stood two feet away from Björk.
Posted by Jocelyn Spence at 08:37 No comments:

Email ThisBlogThis!Share to TwitterShare to FacebookShare to Pinterest
Labels: performance

even for an extrovert...

...this has been a tiring week, and it's set to get even more tiring!

Tuesday I spent the bulk of the day at the Live Art Development Agency Study Room, which is a fantastic use of a (dare I say slightly uncomfortably) small space. They've got books, taped performances, interviews, materials, articles, and all sorts of ephemera from live art and performance art of all stripes. I could spend a month just wandering through the coolest of the cool and barely feel like I've scratched the surface. The staff also gave me some good ideas of people and performances to look into, must better than any search engine. It's in an old school building on Arnold Circus, an area that as I understand it has been recently renovated. Successfully, I'd say, because it's cute as a dang button, and just a few blocks from the most exquisite hot salt beef bagels with mustard, fresh and cheap.

Makes getting the train back to Farnborough a less than thrilling prospect...

Anyhow, then Wednesday to Friday I was at EVA London 2011, a conference on Electronic Visualisation and the Arts. The title sounded promising and the paper abstracts sounded intriguing, so thanks to a wee pot of money from Surrey's Dance/Film/Theatre department, I was off. Now, I'm new to the whole academic conference experience, so I'm the first to admit I don't understand the subtleties and complexities of these things. But I have to admit that I came away from three solid days of interesting, intelligent talks by interesting, intelligent people... and I'm still a little unclear as to what EVA is all about. I suppose that's a good thing, as an interdisciplinary-type researcher, to find a very interdisciplinary-type group of researchers to hang out with for a few days. Being at peace with change, at one with the liminal, comfortable in the many skins you're in. Something like that. Yep. Plus there was a girl there from Los Altos, proving just how small the world really is.

Tomorrow I'm off to the Manchester International Festival for The Life and Death of Marina Abramovic. I've heard odd things tweeted about it... and then Thursday I get to turn a whole nother year older. Whoopee for me!
Posted by Jocelyn Spence at 04:26 No comments:

Fab stuff, nepotism or both